Over time repeated traffic and heavier loads can weaken (fatigue) the pavement structure, and growing traffic counts require higher structural strength. When a street, parking lot or driveway just doesn't hold up anymore, or when the pavement deteriorates due to lack of maintenance it may seem that it is at the end of it's lifespan and there is no other alternative but to completely start over to demolish it and rebuild it from scratch. But there may be a cheaper alternative available to you. At Camelback Paving we want to coach you as to every alternative so that you don't make the more expensive decision when that is not necessary.

A customer may experience more traffic or heavier traffic than the road was meant to carry when it was originally built. Maybe the closing of another alternative route caused more traffic to be deferred to a route that wasn't built for that. Or it may have to carry heavier truck traffic than when it was originally built. And perhaps it will have to be demolished and rebuilt in the future. But now, when more strength is simply needed, it’s time for a structural overlay, that is, one or more layers of new asphalt surfacing. The existing road should be in good shape, and any distresses should be fixed before the overlay is done. This is done with a good tack coat (a thin layer of asphalt applied to the old surface) for essential in bonding the old and new layers.

It is similar to a facelift for your pavement. An overlay adds new life to older asphalt, repairing flaws in appearance and adding a new layer of pavement to the top thereby giving it a brand new appearance for much less money.

When constructing an overlay, the old surface is typically ground off. Any minor structural deficiencies are then repaired. Finally, a new surface is applied. This prepares your site for the paving process, where we apply a new layer of asphalt over the existing pavement, then compact and smooth it. Your surface is now ready for final touches such as parking striping, directional lines and arrows, speed bumps, signage and more.

Learn more about our pavement overlay services and contact us for a free estimate. 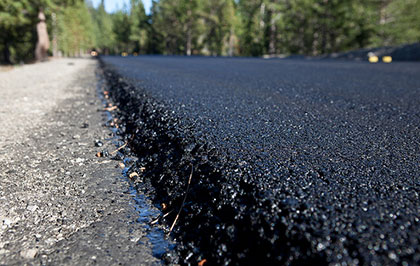